REFLECTIONS ON A DECADE OF MIFF 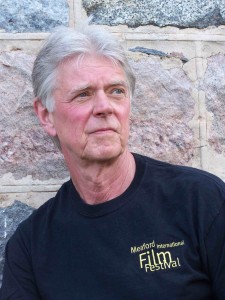 The party tent has been put away and the volunteers are taking a well deserved rest. The tenth edition of the Meaford International Film Festival is now a part of history. But what a history it has been! From that risky moment when the Meaford Hall and Culture Foundation decided to gamble on Gough Lewis’ idea, MIFF has become “one of Meaford’s signature events of the year”, according to the Meaford Express.

Just think, Meaford Hall didn’t even have a projector when MIFF was first given the green light; but within a few short months, Paul Osborn and the crew made sure the newly renovated jewel of Georgian Bay was ready. My predecessor, Michael Anderson remembers – ”When we started this we didn’t know what to expect or where it would go.”

Where it did go is remarkable. Local student film makers are now showcased every night, as are our local restaurants. The audience has taken ownership of our people’s choice award, the “Pomme d’Or”. New friends are made trying to answer the nightly Trivia Quiz. There have been special displays related to the films including never before seen photographs of the historic bloody civil rights battle in Alabama (“Selma”); the military display of weapons and equipment provided by our neighbours at the “tank range” (Restrepo) and the exquisite work of an artistic enigma (“In Search of Vivian Meir”).

This year we also saw the launch of the new “MIFF Classic” (Kinky Boots); and we picked up a couple of awards honouring our contribution to the community.

There are other film festivals nearby, big and small, but none offers the unique experience of stimulation and community celebration that MIFF now provides, including interviews following the films. I can’t prove this, but it seems to me that MIFF was one of the first festivals to overcome the limitations of distance and travel costs by offering live access to relevant guests via Skype. Suddenly, Ralph Nader (the first live Skype interviewee) was here on screen in Meaford, talking from Chicago about the film “An Unreasonable Man”. Since then, we’ve Skyped live with numerous guests, including this year, Brazil’s Anna Muylaert, director of “The Second Mother”. But over time, I have found that audiences really responded to discussions on stage. They not only enjoyed the interview but were able to pose their own follow up questions at the post show parties. To this end, I’ve spent a lot of effort convincing busy people that it’s “worth the drive to Meaford” and there have been a few coups. People come up to me to rave about the fact that David Ebershoff, author of “The Danish Girl”, actually flew up from New York just to be with us this year. ”He was so approachable and thoughtful, I can’t believe I got to talk with someone like that”, one audience member said to me. I can still see the very lengthy, standing ovation the audience gave to Toronto’s Desmond Cole, who despite a frenetic schedule, braved the stormy weather to make it up just in time to compare his reality as a modern black man to the epic battle of segregation portrayed in “Selma”. Just as moving were the personal memories of two Canadian soldiers who opened up about their experiences in Afghanistan (“Restrepo”).

Throughout, the formula has been pretty simple. Four award winning films that offer a fresh perspective on the world around us or, as one Trip Advisor review put it, “films that make you think”.

If you’ve come away from a MIFF evening with your preconceptions challenged, or if a story has touched you or shaken something inside you, and you enjoyed it, then I’ve done my job. One of my favourite comments, and one that I hear often is, “I wouldn’t have chosen to go see that film but I’m sure glad I did, thank you.” And now it’s time for someone else to chart the next exciting decade. As you may know by now, my colleague Joanne McKenzie is the new Artistic Director of MIFF; and I look forward to joining you in the audience and enjoying the fruits of her enthusiasm, sensitivity, and curiosity. All that is left, is for me to thank Rod MacAlpine and the Foundation, Susan Lake and the crew at Meaford Hall, our sponsors and most of all our volunteers who made my past five years so memorable and MIFF so special.